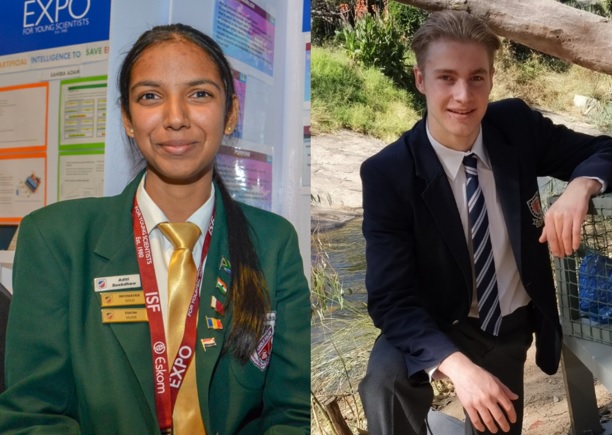 Aditi Sookdhaw, 18, from Star College in Durban won a gold award, while Kyle Dawson, 17, from St Stithians Boys College in Johannesburg won a silver award – both focusing on the critical field of environmental studies.

Sookdhaw found a viable method to make bioplastic from avocado seed extracts, naming her project ‘Polymer Bioplastic’, and said winning a gold award on an international level was truly a fulfilling accomplishment.

“I would like to thank the Eskom Expo for Young Scientists for giving me this opportunity to achieve more than I ever anticipated. Taking part in the WISF virtual expo was different, but we were still able to present and showcase our projects to the same audience as if we were in an actual, live expo,” she said.

Sookdhaw plans to further test her project in terms of organic materials used in the process, as well as more intricate analysis of the procedures itself. “Hopefully, in the near future, my samples will be mass-produced to replace synthetic plastics, and in future solve a worldwide problem,” she said.

Dawson devised a prototype to trap plastics, which he tested in the Klein Jukskei River in Gauteng.  “When I started this project, I had no real goal or end vision. I was simply doing what interested me in line with my passion for the natural world. If you had told me at the beginning that I would be representing my country and then be awarded a silver award at the WISF, I simply would not have believed you. I am beyond grateful for this opportunity and I am thrilled to know that I had a positive effect on the judges,” he said.

Dawson, who plans to patent and possibly sell his idea, added that the hours of work that went into his project were tremendous. “The project constantly needed to be modified and updated in order to meet the criteria. This, being said, this experience is something I won’t forget and it will be an achievement I will carry with me for the rest of my life,” he said.

While congratulating the learners on their achievements, Eskom General Manager of Risk and Sustainability, Andrew Etzinger said the outstanding achievements of the young scientists at WISF, which is very competitive and of high standards, is to be applauded.

“We at Eskom are proud of their achievements and attribute it to their hard work and dedication. This also speaks to the standards at Eskom Expo, one of our flagship initiatives, which is on par with international science fairs. These are the young scientists who will be the disruptors, change agents, decision makers, inventors and architects of a better future for all. Expanding the country’s skill base is one of the Eskom Expo’s top priorities, and Eskom relishes the opportunity to unearth promising learners and put them on the path to academic success,” said Etzinger.

The WISF is an international scientific competition which focuses on innovation. It was founded by the Indonesian Scientific Society, and featured a virtual exhibition – used during the COVID-19 pandemic to provide a different perspective on interpersonal communication.

Eskom Expo Executive Director, Parthy Chetty, said: “Our South African learners continue to do us proud on the international stage, especially under the abnormal circumstances of disrupted schooling and lockdown challenges. Our two winners have set an example for other learners to persevere under any circumstances.”

Registration is currently open for participation in Eskom Expo’s 2021 virtual provincial science fairs. Learners in grades 4 to 12 can register and upload project documents, including an abstract, research plan and project report by clicking on the Expo App. By clicking on the Resources tab on the website, learners can access valuable resources and easy-to-use templates that will assist them with their research projects.