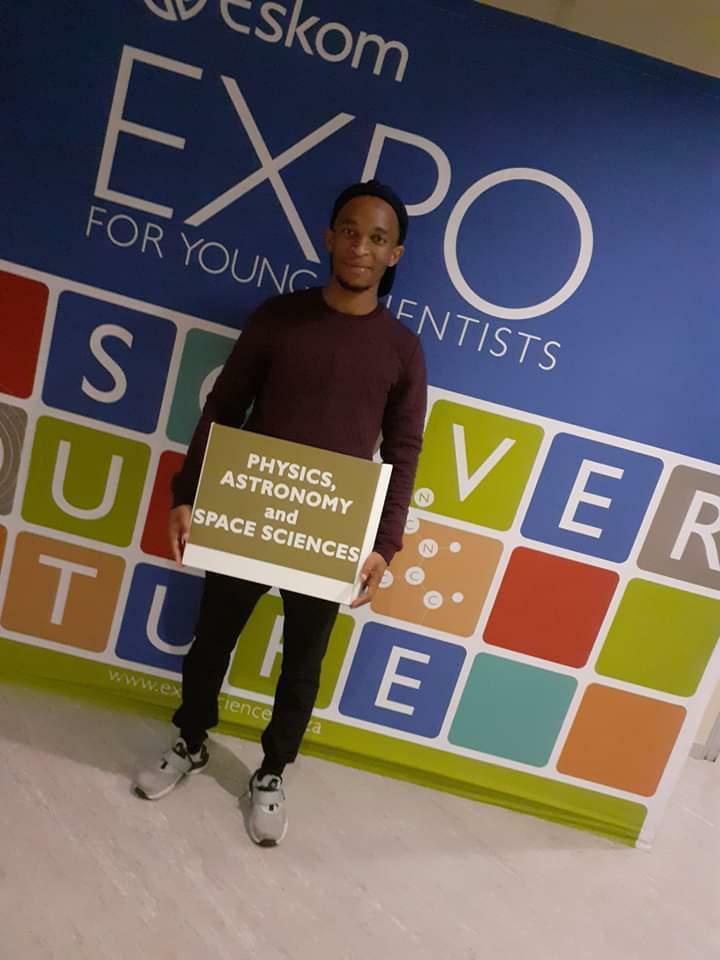 Eskom Expo for Young Scientists alumnus, Kevin Pogiso Thebe, has had a keen interest in science, technology, engineering, mathematics and innovation (STEMI) from an early age, and always sought to develop new ideas and solutions for existing problems.

Thebe became involved with Eskom Expo in 2012 when he produced small projects for the regional science expo while in high school.

“Every time we were supposed to go to regionals, I always had other obligations in terms of sports and other projects that required me to travel at the time. While I did not end up at regionals with my work, I took steps to further the projects, with one of the memorable ones being: the rock-fall detection system,” said Thebe.

Thebe completed Matric in 2014, attaining a position as one of the exceptional students in academics and sports (soccer and cricket). He had been a dual learner in Matric – schooling between Bridge House School in the Western Cape and Tiger Kloof Educational Institution in Vryburg in the North West, with most of his time spent at Tiger Kloof.

In 2015, Thebe began his undergraduate studies in BSc Physics and Astrophysics. By the end of his final year in 2017, he decided to take another course in Accounting as he aspired to start his own business.

Thebe went on to further his studies at the North West University, achieving a Master’s Degree in Particle and Astrophysics. His research mostly dealt with exploring the existence of the navier-stokes equations on a closed interstellar – which was his way of making an attempt at one of the most brilliant mathematics questions layed by the Clay Mathematics Institute (CMI), which is still a work in progress.

“I’m currently serving as a mentor and specialist at Eskom Expo for Young Scientists and is also a part-time junior lecturer at the North West University. From as far as I remember, I used to ask questions regarding stars and how things work, but the main one was why can’t we visit other planets? No one around me ever really gave me a satisfactory answer,” said Thebe.

“Therefore, I pursued my interest with the National Aeronautics and Space Administration (NASA) and their space race with the Soviet Union. I told myself that one day, I shall be one of those astronauts in the space shuttle making that discoveries of new worlds, but somehow I was not sure if it was a career to pursue, especially since I had offers to study Accounting, Geology and Mechanical engineering. I ended up choosing to study the nature of the stars as that was one of the questions I’ve always wanted answers to,” he added.

Thebe started as an Eskom Expo mentor in 2017 in the Free State under provincial coordinator, Nico Swartz. He then relocated to Potchefstroom where he continued being a mentor, convenor and judge in the Mathematics and Astronomy categories.

He went on also to judge at the Eskom Expo International Science Fair (ISF) in Boksburg, whereby his next goal was to work with the students who go on to participate in international science fairs abroad.

“I really like being part of Eskom Expo, because one can share knowledge with the young generation, and also help them have confidence to do good,” he said. “For example, all the students I mentored in 2019 are now studying at different universities, pursuing engineering careers because I believed in them when no one did”.

Thebe’s dream is to create an innovation hub in Africa that can help nurture young minds, and assist them with their innovations.

“I’m currently in the process of creating such a hub like that of SpaceX and Tesla, as Elon Musk is one of the people I look up to,” he said.

“Every day should be a better day than the previous, meaning that learners should work hard, put in effort and study smart and efficiently,” he urged.

Learners who are interested in taking part in Eskom Expo, can register and submit projects online by clicking here.