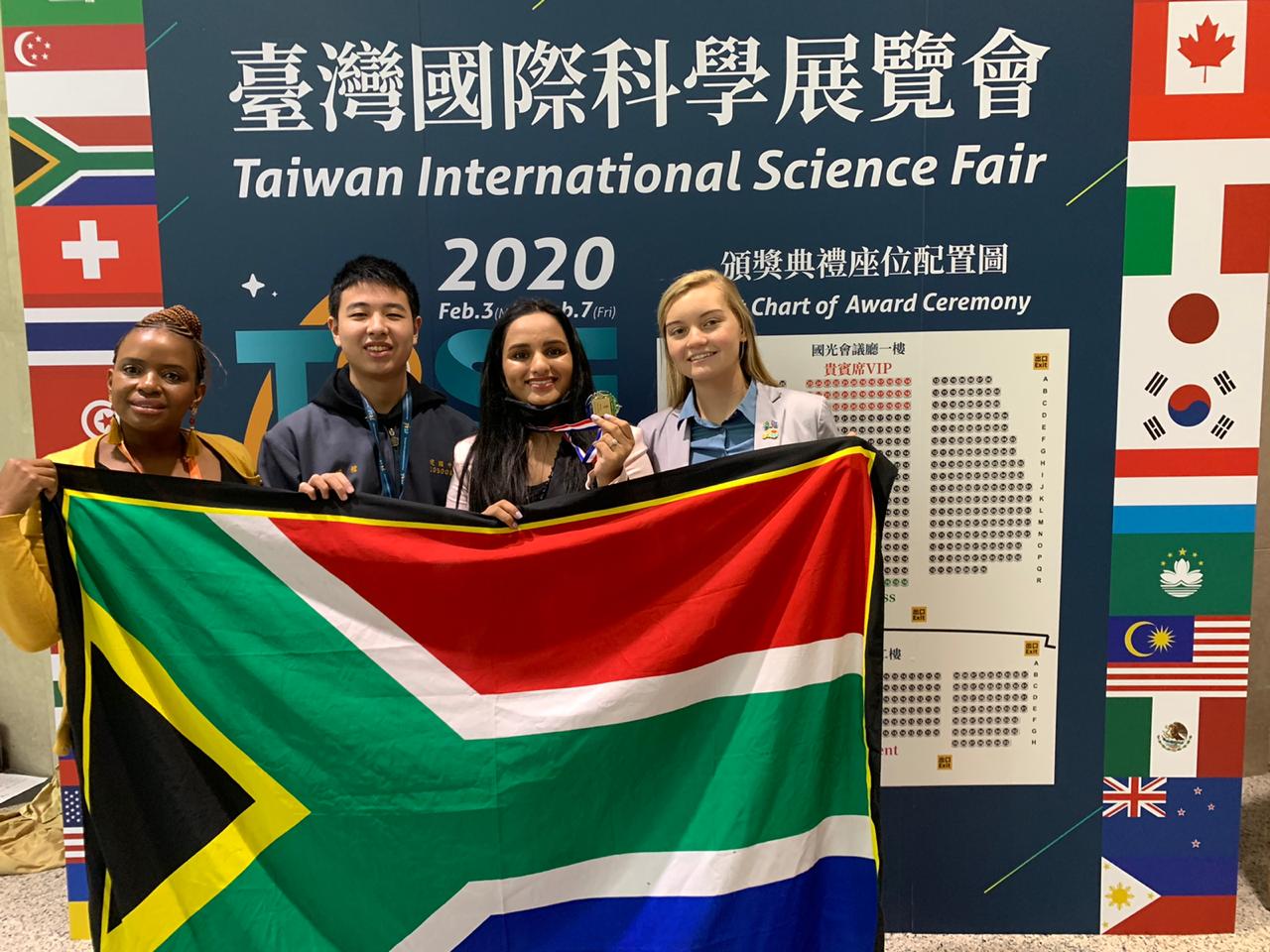 Young scientist Farida Cajee from Schweizer-Reneke in the North West has won the second prize in the engineering category at the prestigious 2020 Taiwan International Science Fair (TISF) which took place from 03 until 07 February at the National Taiwan Science Education Center in Taipei.

Cajee, 18, impressed judges with her project, ‘Using EEG neuro-feedback technology to control a prosthetic hand’, which aims to be a more affordable prosthetic alternative. The project entails an electroencephalograph (EEG) headset that measures brainwaves paired with a prosthetic hand from recycled material which is able to move based on thoughts.

On being awarded the second prize in her category, Cajee said, “I’m absolutely amazed and grateful to have impressed judges at the fair this much, I really can’t believe it. I made plenty of new friends at TISF who were from Mexico, Indonesia, Singapore, Hungary, Canada and Japan, while learners from Switzerland gave me a whole block of cheese to bring home”.

Cajee had previously showcased her science project at the Eskom Expo for Young Scientists International Science Fair (ISF) in September 2019 and won her place to represent South Africa at the Taiwan fair after being nominated by a panel of academics and professionals. She impressed judges with her ingenuity, depth of knowledge and mastery of inquiry methodology.

“I’m currently in Matric and would like to focus on my school work this year, and then further my project or try to sell it to get into production, so it can help people,” said Cajee.

“Eskom Expo has opened so many doors for me, I’ve travelled halfway across the world, and would like to encourage other learners to take part at least once, because it’s the only place where nothing else matters besides your ideas. Every idea is genius and everything you do at Eskom Expo will open doors for your studies and career,” she added.

Cajee was joined on the tour to Taiwan by Miné Steenkamp, 16, from Hoërskool Douglas near Kimberley. Steenkamp, who won Eskom’s best innovative project award at ISF, showcased her project: “Luminol-Artemisinin: the alternative for bloodstain detection”.

Eskom General Manager for Risk and Sustainability and Eskom Executive Committee (EXCO) sponsor of Eskom Expo, Andrew Etzinger congratulated Cajee and Steenkamp on their impressive representation of South Africa in Taiwan. “Eskom invests in Expo for Young Scientists to not only hone the skills of talented researchers, but to add value to the lives of promising young scientists by driving development of our country’s science community to encourage learners to pursue careers in science, engineering and technology,” said Etzinger.

With Eskom Expo celebrating its 40th anniversary this year, Eskom Expo for Young Scientists Executive Director, Parthy Chetty said, “These young ladies made South Africa very proud of them, to have the courage to compete on the international stage, in one of the most advanced countries with regards to science and technology education. Farida has participated in Eskom Expo for the past 7 years and has eventually reaped the rewards of her hard work and persistence. She followed her passion.”