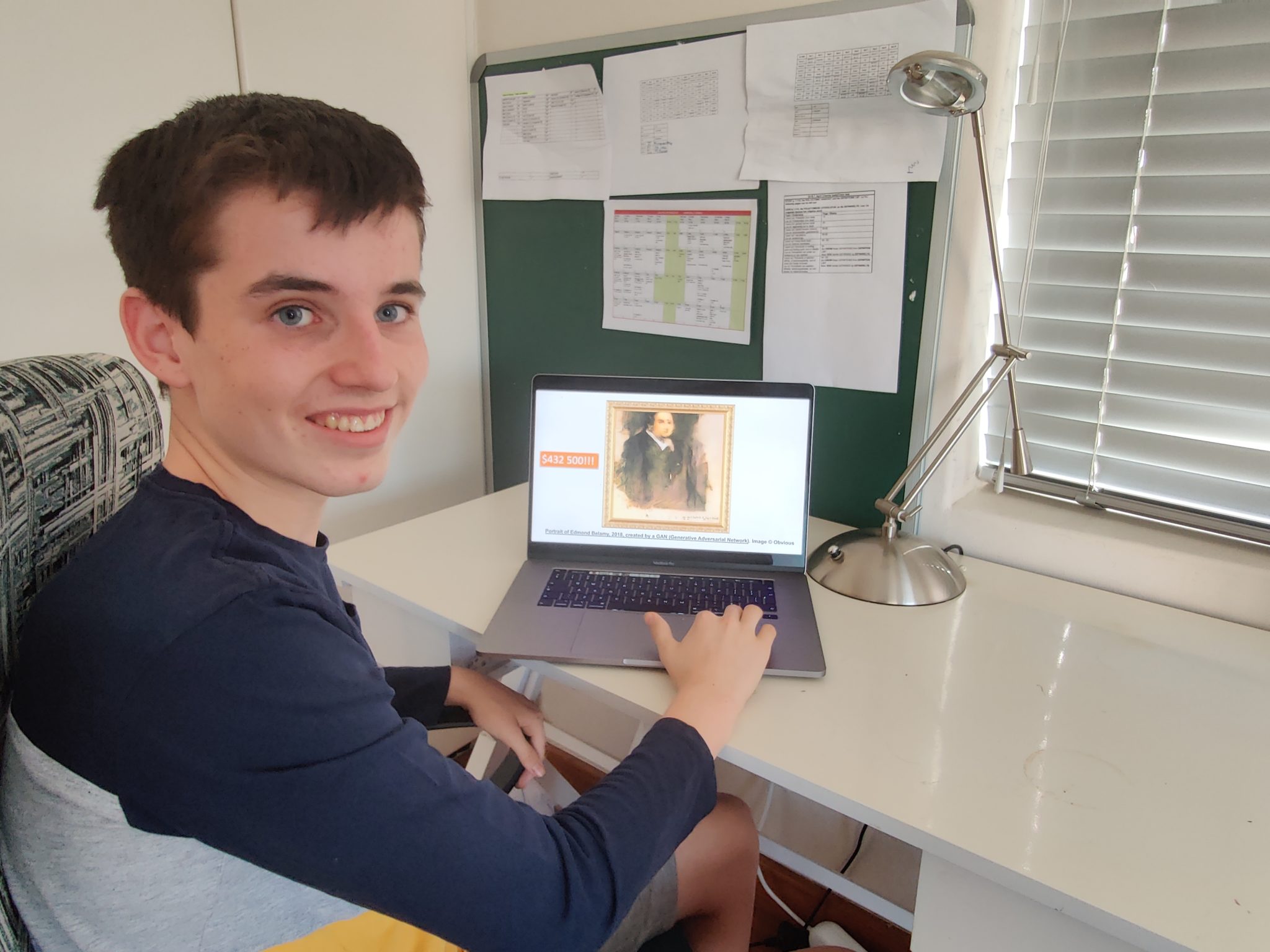 An inquisitive young scientist from the Western Cape who investigated whether people could differentiate between computer-generated and human art, has been selected to represent South Africa in the 2021 Virtual Regeneron International Science and Engineering Fair (ISEF) in the United States.

Alexander van der Merwe from Paul Roos Gymnasium in Stellenbosch was inspired by an artwork produced by a Generative Adversarial Network (GAN) computer algorithm, entitled Edmond de Belamy, from La Famille de Belamy, which sold for a staggering $432 500 (about R6,3 million at the time) at a Christie’s art auction in New York in October 2018. Thousands of artistic images are fed into the GAN network to “train” it to produce artistic images that are so realistic, it is difficult to tell it apart from human artwork.

“I am really interested in Artificial Intelligence, and when I read about an artwork produced by a computer selling for $432 500 at an art auction, I thought, can it therefore be that computers can use artificial intelligence to have imagination – a characteristic that only humans should have? Answering this question has far reaching implications for how we view computers’ role in society,” said Van der Merwe.

The 15-year-old explored whether machine learning algorithms can create art that is imaginative and creative enough to fool people into believing that the art was created by a human, using a sample size of 480 participants.

“AI is no longer about programming robots to do household chores. Alexander has ventured into the lesser known field of machine learning for the creative arts. Can computers learn how to reproduce human art through a set of algorithms or can human art only be created by humans? Is creativity exclusively a human competence? Can humans tell the difference between human art and computer-generated art? Will machine learning alter our constructs of the fine arts, which are humans expressing creativity, emotion, skill, and intelligence? This also has implications for the creative arts as a multi-billion dollar industry. Hence the significance of Alexander’s research goes far beyond just machine learning and art,” said Naidoo.

Eskom General Manager of Risk and Sustainability, Andrew Etzinger, said: “Eskom supports Eskom Expo for Young Scientists in highlighting the emerging trend of Science, Technology, Engineering, Art and Mathematics (STEAM), due to the natural and mutually beneficial relationship between science and the arts. This was explored by Alexander’s understanding of both machine learning and the creative arts, as he sets out to represent the country in the largest science fair in the world, Regeneron ISEF”.

The Regeneron ISEF event will occur the week of 16 to 21 May 2021, and learners in grades 9 to 12 will compete for nearly R73 million in awards, prizes and scholarships. Each year, more than 1 800 young scientists from around the world earn the right to compete at Regeneron ISEF by winning a top prize at a Society for Science-affiliated local, regional, state or national science fair.

Registration is open for participation in Eskom Expo’s virtual provincial science fairs. Learners in grades 4 to 12 may register and upload project documents by clicking here.