Azizipho Mxotwa shares his passion for science and Eskom Expo 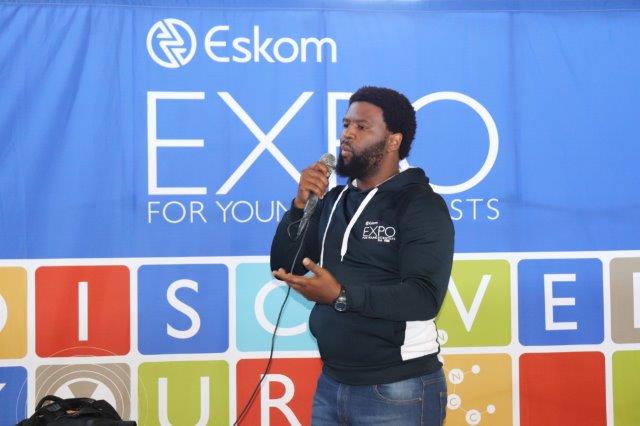 TV shows like Once Upon a Time, Quantum Leap, Bill Nye the Science Guy, Beekman’s World, Newton’s Apple, Future Fantastic and the X-Files all paved the way to Azizipho Mxotwa’s keen interest in science.

Mxotwa was introduced to Eskom Expo as a learner at Richard Varha Senior Secondary school in 2004. The school was actively involved in science activities, which ranged from Olympiads to National Science Week activities to science quizzes.

“Our then principal, Mr Myeki was the life of science activities in the school and he approached us that year saying the following year we will enter a competition called Eskom Expo for Young Scientists, which excited us all,” says Mxotwa.

“The following year, Mr Myeki introduced us to Mrs Noreen Burton who was the Eskom Expo regional science fair director (RSFD) in East London at the time. She expressed her excitement in having us participate,” he adds.

Mxotwa cited that he had been exposed more to engineering-related industries while at school, and entered a project in the engineering category in the East London regional science fair.

“We created a bridge that would connect Robben Island and Cape Town with the aim of increasing tourism to the island and growing the country’s gross domestic product (GDP). The mechanics and engineering that went into creating the first bridge of its kind in South Africa was the goal,” says Mxotwa, who ended up winning the Best Development Award at the Expo.

This led to Mxotwa and his project partner being selected to compete in the Eskom Expo International Science Fair (ISF), where they won a bronze medal and the opportunity to represent South Africa at the Stockholm International Youth Science Seminar in Sweden, which is held annually during the Nobel Prize Week.

Mxotwa went on the obtain a BTech Industrial Engineering degree at the Tshwane University of Technology, and is currently the CEO of Red Cup Generation Pty LTD, while serving as the regional science fair director of Eskom Expo in the East London region.

“My passion for Eskom Expo lies in me being appreciative of what it has done for me over the years. It been the most fun I have ever had, along with traveling and meeting new people, but also the journey was that of self-knowledge and academics.

I wanted to give back not only in the role of being RSFD, but also share my experience over the years, and maybe inspire upcoming generations of doctors, IT specialists, engineers and builders. This was one opportunity I could not miss. This is the first company I’ve ever been a part of where I felt like I’m truly part of a family,” he says.

Teachers and schools that are interested in taking part in Eskom Expo in East London, can contact Mxotwa by calling 082 083 3645 or sending an email to amxotwa@gmail.com.